It’s that time of the year to sit down and make the list for construction at the Love Shake. It’s hard to believe we are hitting season five, yes our fifth year of Building The Love Shake. But here we are and here’s our Honey To-do List.

So far the Lady is doing great this Winter and the only repairs we see coming is one shingle on the roof has gone missing. With all the rainstorms and high winds we had over the Fall and early part of the Winter, we consider ourselves lucky compared to the damage that was done to many of the cottages.

With all that heavy rain, we have had the past two years, we have decided to have the house lifted for the second time. We did the lift three years ago and placed new bocks under the house.

But we have noticed a slight shifting and have booked someone to come in and jack up the house. This time around we are having concrete pads laid under where the support blocks are going and more blocks put in again. This will give the house more support and stop the sinking of the blocks.

This project is planned for early May so that we can get to what I am calling the facelift.

For the past four seasons when I tell people the directions, I tell them to come to the end of the road, when you see the ugly house, you’re there. This year our Lady will not be called the ugly house anymore.

After much deliberation, we have finally decided on the color of the cottage. At first, when choosing the color, I was thinking of something bright and cheerful.  Maybe a Red or Burnt Orange. As time passed and we drove back and forth to the cottages, I started pointing out different colors to the husband and friends. When the vote came in we decided to go with a more natural color to fit in with the design of the house and the area. And so drum roll….. Smokey Gray it is.

Also on the list for this year is to build the built-in for the entertainment system. Though this is a two-day project it was put off this past season because I needed to purchase the new TV and stereo system.

We have learned as we went along that its easier to build around something then it is to find things that fit. The new system is at the cottage now and all I need to do is pick up the wood and get the husband in front of his saws. Then Jodi and I will have to start staining the wood that will be the same barn board and stains as the walls were done.

The deck is an ongoing issue.

As I mentioned last year the back deck is a four-step process and we have step one done. Now we have a big decision to make. Do we finish the back decks this year or do we add on the front deck?

It would be nice to finish the back deck… But if we build the front deck, then its easier with the dogs to do the back deck.  There is also that beautiful sunset every night that we can’t see on the back deck and also all those Rose Bushes I keep putting in the holding garden could get their permanent home. Oh and one other thing about the front deck… It’s where we have no neighbors and its always quiet. I guess you can tell which way we are leaning.

Which brings us to the gardens. This year there are few new gardens going in. On the side of the house running between us and the open area on the back right side of the house a new row of Rose of Sharon is going in to create a private area for the back deck without using hardwood and allowing nesting areas for the birds. When it grows in my hope is to get this effect. 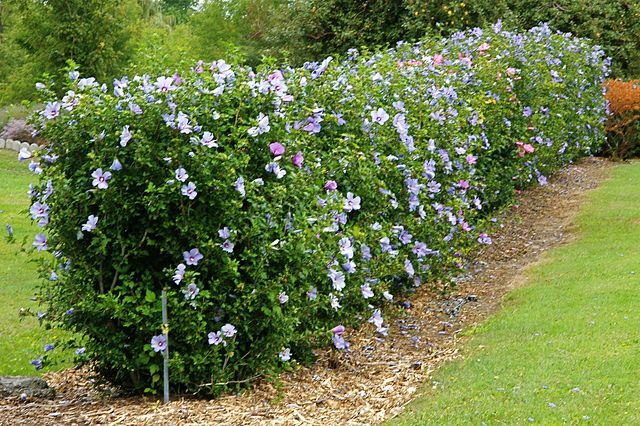 When we do the siding on the house, we are also doing the existing shed with the siding. Once that is done, I have Black Eyes Susans waiting to be planted there to soften the look and also because the little girls who live behind me are always checking on the flowers.

Yes, I know I’m going soft.  The little girls are the children of the man with the bad attitude and dog issue, but hey his wife is nice and the kids are cute.

This brings us to shed number two. Last year we bought a second shed for the cottage. This one is the garden shed.  We never put it up because of the water from the rain last year. When the house gets lifted a concert truck will be coming in. With them, they are bringing the extra concrete to use as a base for shed number two.

Once it’s up, it will be painted in gray and I have made sunflower stencils to paint on the shed. The good news… The space between the two sheds already has a garden in it. I have been planting herbs there for the past two years.

The cottage also got another present. I gave in and bought a microwave. I swore when we bought the cottage that we were going to keep it a cottage not turn it into another home. But now that we added satellite light, the movie channels, a flat-screen, and a new stereo system, what’s a microwave?

We still have the new kitchen to put in, but the one we have it functioning and doing fine. Maybe this year it will get put in. Time will tell. If we don’t get it in this year, you know where next year’s projects will start.

With the big list in front of us and the work waiting to begin, The Warriors and us, have cottage fever and can’t wait to get started.

It’s now down to six weeks to do the official opening and get into clean up and stock up.  It’s also only six weeks to see our cottage friends.  Six weeks and counting. Boy, we sure do miss our Lady.