I feel like I should be doing a dance. We have finished all the drywall in the Main Room that we can do.

As I mentioned in another post, we can’t do the back wall until we are ready to put in the new sink, but by golly, the rest of drywall is up.

The gable took a day of its own to cut the pieces and put them up. Little did I know when I said I wanted windows and doors in the gable and the peek, I had no idea what that meant for drywalling.  I now refer to it as putting a jigsaw puzzle together.

On day two I figured how long could it take we only had to put up four sheets. That was a flat wall with easy cuts. HAHA

Anyone who has been following our blog or knows us personally know there is no such thing as an easy job or doing it simply.

Remember when I said the lighting was done. No, it wasn’t.  We discovered the area near the bathroom sink was too dark to see well even with the light on and so, we had the wall open and ran the electrical to add another light to the bathroom.

Now that we have walls and design for the kitchen, more wiring needed to go in. We needed to run the wiring for where the vent is going over the stove.

Who knew more drywalling meant more electrical work and more insulation to put in the wall. 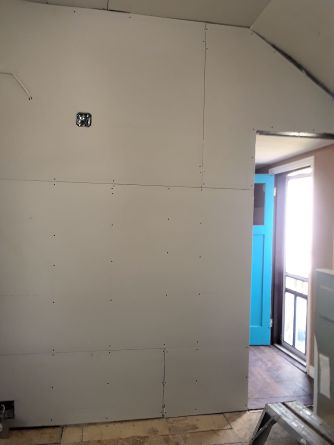 The four sheets turned in to eight hours. The drywall is up. The kitchen is put back together and I’m a happy girl.

Next weekend, we start taping and putting. Plus there are so many little things that need to be done that I am afraid to tell husband I remembered the vent but forgot about outlets.

I do believe we are going to be doing more wiring.

I now have to figure out where the new outlets are going for when we put in the new counter and cabinets.  The good news is, the drywall hasn’t been puttied yet so it still easy to unscrew and put back up, which makes it a lot easier than running wiring through the wall.

On the positive side of me forgetting the outlets, I never question if Husband loves me as he just looks blankly at me and starts the next project.