The cottages has been gutted and the sub-floor has been laid. Now its time to get some hydro in the cottage. Up until this point we have been running off of one outlet.

Out had to come the ancient breaker box, and in came a new one. That sounds easy. Higher an electrician and have him change it.

Well that works if you have a home that you are not getting building permits or a variance for. When you are, then the stage of doing that, works this way.

Hydro comes in and shuts off the power to the house. The electrician comes in and installs the box. Then you wait for the inspector to come in.

Then he says its OK and hydro comes in again and turns it back on. Then you can start working again.

But wait.. First you have to build walls to attach  the electrical outlets and light switches to. You also have to build the frames to support the walls. So the Weekend Warriors head back to the cottage to start building.

Now the problem here is, waiting for the Variance.

We are now restricted on what we can do. The addition  we want to put on can not be touched until we get the variance. Nor can we change the two outer walls, where we are adding the gables. But we can start building the walls for the bedrooms. Off we go on that journey. That means going shopping.

Shopping! Did I mention shopping? Every day off of work and many days after, are needed to go get more supplies. The house we live in now has become over taken as a storage area for the supplies for the cottage. If Home Depot gave frequent flyer points, we could now take a trip around the world.

Every Saturday and Sunday, first thing in the morning we head to Home Depot, purchase more supplies and load up the trailer to the drive to the cottage. Once we get there, every thing has to be unloaded and brought in the cottage so we can work. Many loads later, I now am getting biceps.

Along the journey of shopping and building, I have also mastered another skill, midnight cooking. That is usually done on Saturday night once we get back for the cottage to prepare and pack up the food for the cottage to feed the Warriors.

A frig, stove and barbaque have now been brought up and put in the cottage. Cooking just got easier… Hallelujah…

The next added bonus is, the dining tent and new table and chairs are getting put up this weekend. No more setting up and taking  down each week. This is where the Happy Dance comes in…

Now, back to the construction. First goes in the new support beams in the ceiling. That requires taking down the old ones.

Then up goes the news ones.

Then the next weekend the framing for both bedrooms go up. Then the door frames are installed. We chose to put in the bedrooms, built in pocket doors.

A plan has to be set up for where all the lighting will go and  where the outlets will be needed. It’s design time.

Where will the beds go? Where do we need reading lights? TV? Will there be TV’s in the bedrooms? The electrical design is laid out.

All the boards have to be drilled through to run the wires through the walls. Here come the girls with the power tools. 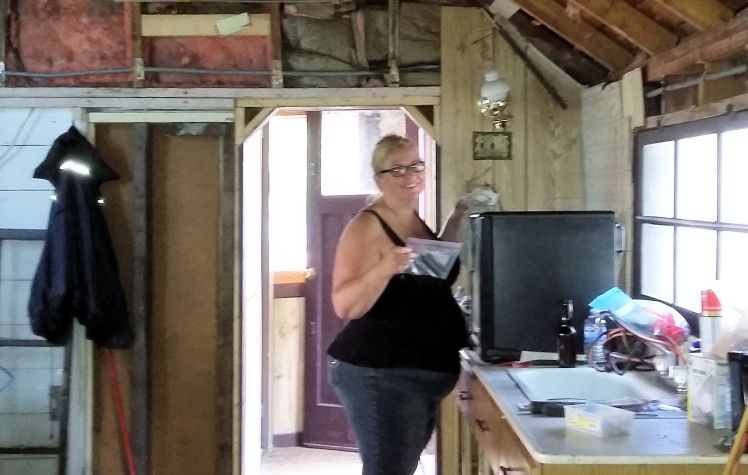 The next step is to put in the new windows in the bedrooms. The guys take the old windows out. 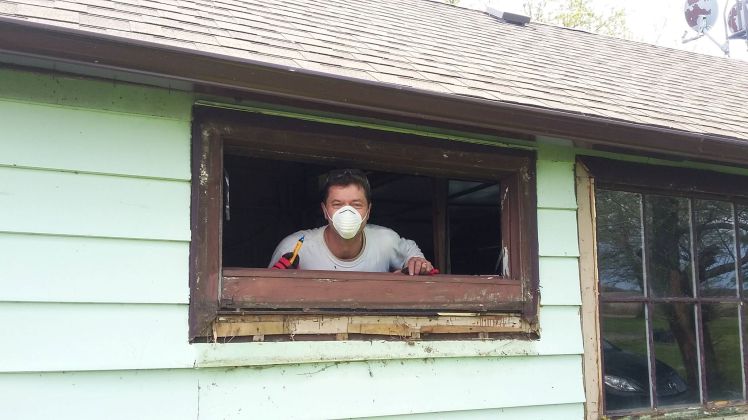 And build the frames for the new windows.

Then the new windows go in.

The next two weekends the wires are ran through the walls. The wiring has to be stapled to the framing so they are not hanging loose. Plugs go in, light switches go in and the pocket lights are installed.

With the new framing and lighting in, the original six foot ceiling are now sixteen foot ceilings.

The wires are ran and you got it….We are now waiting for the inspection again before we can hook up anything. So we are now put on hold. No insulation can go in and no drywall can go up. The inspector is supposed to come in, hopefully Monday. That will get us back on schedule for the next weekend.

In the mean time the Kentucky  Flagstone for the wall has been ordered and is ready for pick up. The porcelain tile is also in, that goes under the Cast Iron Stove. Both need to be picked up and taken up to the cottage.

The lawn needs to be mowed. The dining tent and lawn furniture need to be set up. The new door handle needs to go on the bathroom door, after the old one locked me in this week. Thankfully, I was rescued by our neighbor Larry, as I was about to climb out the bathroom window.

And there are still more supplies to go and buy.

The car can be put on autopilot, I am sure it knows its way there. I have now driven there at least thirty time in six weeks.

I no longer believe I own the cottage.  I believe the cottage owns me. But we are still enjoying the project and lets face it there is no quitting now.

There is no rest for the wicked or the Weekend Warriors.

You have now been caught up on the first eight weeks of our journey.

2 thoughts on “The First Eight Weeks”