When we bought the Love Shack, we bought her as is. No inspections included.

Being in the construction business for over 20 years, we knew there would be surprises. Whenever you do construction you find something that you didn’t plan on. Those are refereed to has hidden cost or other wise known as OH SHIT.

So far we had been lucky. The roof was only a couple of years old. The structure was solid. The sub-flooring weren’t rotted. The ants found in the wall were not termites. And with the new sub-floor, we had closed off the entrance for the lady bug colony and the spiders had been locked out.

As I had mentioned on the page of the Cottage History, the holding tank for the Brown Water and the Cistern had been installed in 1994. This is 2016. They had been in the ground for twenty two years.

Luck was on our side, when the guy came to empty the Brown Water, the tank was fine. Upon farther inspection, all was good and passed the Environmental Inspection.

The Cistern, well, not so lucky. When we lifted the lid to look in, that was some scary looking water. It was a lovely shade of tea brown. It also had some interesting swimming sort of bugs and worms. Then the not so good news. My guy from the water delivery company showed me, as he handed me pieces from the side of the cistern. The concrete side were shattered from old age, frost heave and time. We needed a new cistern.

A new cistern had to be ordered. So it was ordered. This one would have a submersible pump and a heating line so we would have water in the winter. It also required the lines to be ran under ground. Once it goes in, it would also need an inside holding tank and a power switch.

Eight weeks later, the cistern has arrived. Now the next set of problems came in.

Once that one was knocked in. The new one would need a new place to be put in the ground. This was a challenge as if left us choices to make. If we put it to the left, we would loose a driveway. If we put it in front, there is an old Beach tree that is the home of many Purple Martin’s. It could damage the tree and cost them their summer home.

The decision was made. It would go in the center of the front lawn.

That’s where Jim came into play. Jim owns a business out by the lake. He does large landscape, and installs and removes cisterns and holding tanks.

In came Jim’s crew. The equipment needed to remove and install the tanks were three times the size of the cottage. The small road leading to the cottage is wide enough to fit a single car driving in. But they got in, equipment and all.

With Jim’s skills and his team, on July 13, 2016, the old tank was sunk into to the ground. The new tank was placed in the middle of the front lawn. The trenches were dug for the wiring for the tank. The driveway was kept. The Beach tree, the home of the Purple Martins have been saved. The water tank is now in and we need a new front lawn.

Everything was done green friendly. Well everything except the lawn. There is no longer any lawn, that is now brown, reflecting the color of the dirt. That will get replaced next Spring.

This is male Purple Martin 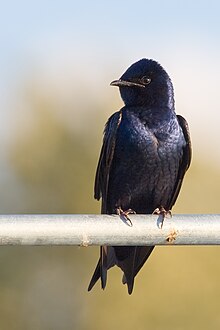 This is a female Purple Martin

One thought on “And Then Came Problem Number 1”